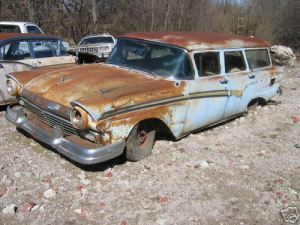 Sometimes it all seems too overwhelming. Like we’ll never be debt free. Not having an EF in place (well there is, but it’s minuscule and only to be tapped in the most dire circumstances) means everytime the car needs something money must be borrowed.

It’s kind of stupid how we combine our expenses. Both our individual incomings and outgoings during the year are vastly different but we share one account. I try to keep it as fair as I can, his money going to his expenses and mine to mine. I guess it works, sort of…

I could pay for all of his car repair debt now (loan excepted), but there’s got to be limits. That’s too large a chunk of my savings. I didn’t want to bail him out this time, but everything needed paying so fast there wasn’t too much choice. So it’s on the Visa sitting pretty.

I don’t think anyone really gets how hard it can be. If you have nothing to fall back on, have a car (presumably a cheap one) and don’t live at home, you’re almost certain to fall into debt for any myriad of reasons.

But looking to the future 🙂 Given we’re almost surviving on one income now, there’s no reason we can’t once I graduate. There’d be less debt to service and I’d be making a full time wage. I’m positive we could live off close to one paycheck (wouldn’t be that hard) and sock the rest away into savings. Then we’d be able to travel pretty soon!

But I don’t like to make plans too far in advance. Unhatched eggs and all that.