So this morning I went to a special morning tea to meet with my ‘scholarship support person’, along with a bunch of other scholarship recipients.

It wasn’t much use to me and the other third years, as we’ve been through it all, don’t have any questions or concerns to raise and frankly are about to graduate. We don’t need to worry about grade averages. We’re in our last year and won’t be back next year, or if we are, our scholarship will be over anyway! This would have been much more helpful earlier on, however. I’m sure the younger students will appreciate it.

Mainly, we went for the promise of a free morning tea. 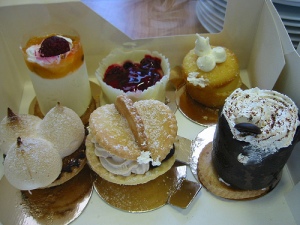 What a waste of time.

Apparently nobody came to the first session yesterday, for which she had gone out and bought a ton of food. So today, all we got was a three litre of Just Juice (and plastic cups) and two plates of plain choc chip cookies. They weren’t even very good. They were OKAY, but nothing spectacular.

We did get to talking about summer school and going on exchange, though. Summer school’s a tricky one. A friend got burned by the office – she took a compulsory third year paper in summer school to get ahead. She would have had to do it anyway in first semester, she just took it over the summer instead. Scholarship staff didn’t care. They flat out refused to pay for that paper for her.

Apparently they continue to pay your fees if you go on exchange, though. Here the policy is you generally go second semester of your second year. I’ve missed out, obviously.

Why didn’t I go overseas? Honestly, none of the universities on offer really appealed to me. But I’ll go through my main reasons here.

1. The financial aspect. Sure your fees are paid, but living costs are not cheap anywhere, really. I just don’t have that kind of money saved to support me through an entire semester abroad. Yes there are other scholarships and grants, and the enterprising girl who spoke today wangled sponsorship from House of Travel, but realistically you’re going to need to cover some, if not most or all of your expenses yourself. Food, board, insurance, passports and visas, souvenirs, and of course travelling around wherever it is you are. I’m not ready for that.

2. I’m not super keen to leave BF. Plus, breaking my lease would be a bitch. Wouldn’t want to leave him paying for two. It’s not that I doubt our relationship; after all he spent six months in the army and we’d only had two months together before that. It’s just not something I would choose to do. I do want to travel, but I’d rather do it while working (not studying) and I’d like to do it with him.

If I happened to be single, I might have given the matter more thought. I still don’t think I would have made a different choice, though. I think my decision to stay in NZ was good. I don’t feel quite ready to travel and although I’m getting the itch I think postponing it and travelling later will pay off.. I’ll get much more out of the experience.

And to think I once planned to go on my OE straight out of school! What a colossal mistake that woulda been! I’m mature, but not that mature. I know my way around Auckland. But put me somewhere else and I don’t know if I could stand on my own two feet. I’d probably even have struggled if I went to uni in a different city….but I wouldn’t have, because nowhere else does this degree like they do here.