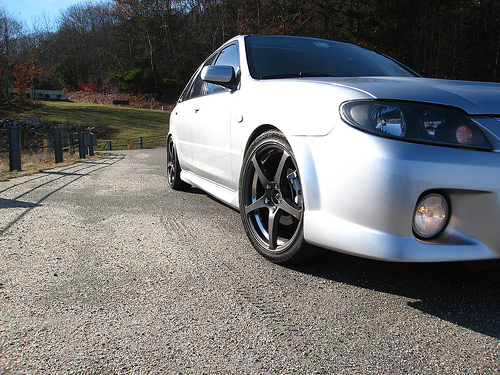 (This is far nicer than our real car)

In my experience, there is no bigger budget buster than the car.

Our little Mazda Familia, bought  for under $2000, is nearly as old as me. It’s 20 years old, and although mechanically, seems to be going okay *touch wood*, physically it’s starting to show its age.

There’s the dampness problem – apparently the passenger door has a little leak. The driver’s window is stubborn. Both doors sometimes stick. The boot no longer holds itself up.  And recently, it has, on occasion, been reluctant to start up.

But it’s paid for. That alone is pretty awesome.

So although we have a reeeeeeally big expense coming up, I’m okay with that. There’s something wrong with one of the wheels, which is also causing it to chew gas like you wouldn’t believe. So although this isn’t essential RIGHT THIS SECOND, it’s certainly going to be cheaper to act sooner rather than later.

Our options: Replace the two front wheels, or all four. Obviously, it’d be preferable to do all of them so we don’t end up with a crazy Frankenstein vehicle. We may be able to get all four for under $100 on TradeMe; the big cost is replacing the actual tyres, sadly. The tyres on this thing are some really wacky type which are hard to find, and not all that cheap. We have never bought brand new tyres, EVER, but even secondhand ones are going to set us back a few hundy.

When I set up our budget, I decided on an arbitrary amount of around $500 a year on maintenance and repairs (not including the close to $280 in registration – that’s extra). I had no idea what was realistic, and it looks like this is going to blow that number right out of the water. Grrr.

How much do you spend on car expenses?

11 thoughts on “Children may be expensive, but so are cars”