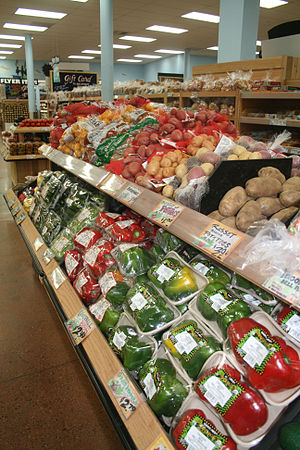 This isn’t a post about reducing the cost of groceries. In fact, we’re more likely to be a little more lax about our grocery budget having returned to two incomes. What’s the point in living if you can’t buy feta or blueberries or garlic mussels or ice cream?

Vegetarians often say they save a lot of money by not eating meat. I don’t know if that’s necessarily true (I guess if I ate lots of filling carbs with my veggies, it could be), but I was interested to see just what portion of our spend is actually on fresh produce and meat.

I know that our total spend is about $130 a week, so this is definitely a smaller spend than usual. T didn’t go to the butcher/grocer when he was meant to, so I had to make do with the shops within walking distance on my day off. Also,  we had a bit of food left over from last week (and may run out a day early), but it’s a decent representation.

$16 rib roast and two pieces of smoked hickory spare ribs. $11 also got us one massive size 20 chicken, which we’ll roast and use for several meals.

$18 got a bunch of silverbeet, three onions, three apples, half a cauliflower, one capsicum, a couple of kumara, and 1.5kg of washed potatoes. (Okay, so the potatoes alone were $4.50. I wanted to make baked potatoes, so I paid for the convenience…)

That’s just over $70. About $13 of that is on household stuff that isn’t food. I’d say on most weeks we’d probably spend another $5, maybe $10, on splurgey foods, or more if we need to stock up on staples. At the same time, we’d probably also spend another $10 on meat.

What does your grocery bill look like? Are you happy with the proportions?