This has got to be the most notorious book of the past year. You might recall seeing an extract from it in the WSJ, after which a gigantic firestorm erupted, with battle lines drawn between author Amy Chua’s supporters and detractors. 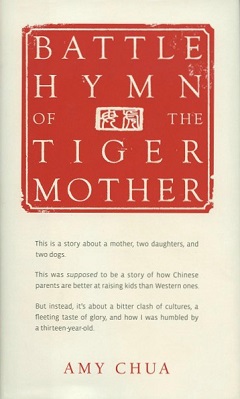 In a nutshell, this is a memoir about parenting, revolving largely around Chua’s quest to constantly push her daughters to excel at piano and violin respectively. There are no days off, even on holidays. There are no sleepovers, no other extracurriculars, no boys, definitely. A traditionally strict Chinese “tiger mother”, Chua’s methods work well on older daughter Sophia, a piano prodigy of sorts who goes on to play at Carnegie Hall. Younger daughter Lulu, however, is not as easy to mould. And it’s clear that if something doesn’t change in their relationship, she will lose Lulu forever.

“This was supposed to be a story of how Chinese parents are better at raising kids than Western ones. But instead, it’s about a bitter clash of cultures, a fleeting taste of glory, and how I was humbled by a thirteen-year-old.”

“When Chinese parenting succeeds, there’s nothing like it. But it doesn’t always succeed.”

Not since My Wedding and Other Secrets (which I cried in) have I had so much fun contemplating cross-cultural differences. I love her writing style; it’s clear, concise, immediately engaging, kind of self-deprecating.

Here are some of my favourite passages:

“By the time Sophia was three, she was reading Sartre, doing simple set theory, and could recognise 100 Chinese characters. (Jed’s translation: She recognised the words “no exit”, could draw two overlapping circles, and okay maybe on the Chinese characters).”

“A tiny part of me regrets that I didn’t marry another Chinese person and worries that i am letting down 4000 years of civilisation.”

“Jed’s parents gave him choices … and thought of him as a human being with views.”

“Like every Asian American woman in her late twenties, I had the idea of writing an epic novel about mother-daughter relationships spanning several generations, based loosely on my own family’s story.”

Chapter 5, On Generational Decline, struck a particular chord with me. There goes a common pattern: the first immigrant generation is the hardest working, building lives from the ground up. The second generation, aka Chua’s and mine (although in my case, technically still a first generation immigrant as I wasn’t born here) will typically go on to be high achieving professionals, less frugal than their parents, and often marry a white person (tick tick tick). The third generation – because of the hard work of their ancestors – will be born into middle class comforts, be surrounded by wealthy friends, expect all the trappings of middle class life, much more westernised and be more likely to disobey their parents.

I know I definitely worry about this – I can’t imagine anything worse than raising a spoilt, entitled child. I don’t want my kids to be as petrified/cowed of me as I was by my parents for most of my life, but I would hope to instil a basic level of respect from the beginning. I want to encourage confidence and individualism, without allowing them to get away with anything they want.

Let me be upfront about where I’m coming from. I didn’t have an Amy Chua for a mother. But mine was certainly more tiger than Western. I never ever nagged them for anything, never ever talked back, never ever challenged my parents, even if I knew I had reason to.

Well, until I did. It was a battle of wills. They pushed, I pushed. I won. I moved out of home while still at high school, went on to win a full scholarship, got my degree, entered the working world. For the first few years, yeah, I kind of hated my parents. The conflict pushed me away, much like Chua’s own father distanced himself from his family. As Chua learns, every child is different. Having the flexibility to adapt is key.

As Chua points out, Asian parents don’t generally blanch at comparing their offspring. This can be tough, especially when siblings are close in age, and one is clearly the more talented/driven. I was aware that I was that sibling, and my own mother expected more of me (which she articulated).

I was a good daughter. I didn’t drink, do drugs, have sex (not that I was exactly awash in temptation even if I wanted to, being a total nerd). Was that ever appreciated? Nope, I only got exhorted to compare myself to those above me, rather than all those slack white kids. Sophia’s diatribe towards the end runs exactly along these lines – railing against that inescapable push to always aim higher, that nothing is ever sufficient.

That said, personally, I’m a Chua supporter.  Unlike my family, she knew when to stop, although she very nearly didn’t. I think her methods were extreme – the screams, the threats, the spending every waking hour outside of school practising music. But her daughters do not actually hate her for that; they’re grateful. They achieved amazing things as a result. The same might not work for other families, but as we know, one size does not fit all.

What I didn’t like about her? She comes across as a bit of a snob. Law and medicine were her only acceptable career paths – typical. She and husband Jed are well off by any standards – law professors who both have books to their name, who travel a lot and take multiple holidays a year. Not all of us can afford to live such a cultured lifestyle by her definition. (Sure, I wish my parents had taken us travelling more. We never went on holidays, domestic or otherwise. And yet, can I really blame them? I found myself perusing the specials board at the fish and chip shop the other day; a family pack was $20, and if our kids inherit our appetites, $30 is probably a more realistic figure. That’s Friday night dinner. And with bread nearly $2 a loaf and milk nearly $4 for two litres, even my dad’s so-called “simple meals” don’t cost what they used to.)

Also, she slammed guitar and drums. (!!!) Granted, neither are as subtle or, perhaps, sophisticated as piano or violin. (I’ll speak as a 6-year dilettante school violinist who never even approached the bar of ‘adequate’. The fretless fingerboard, the bow, the awkward chin resting – it’s got to be one of the hardest instruments to conquer.) But do you know how much hard graft, coordination and rhythm a kickass drummer needs? Are you aware just how many techniques there are to be learned, across different kinds of drums, sticks, genres? And as a guitarist, I will also defend six-stringers. Music theory applies here, too – chords, scales – plus the huge variety offered by alternate tunings, and of course, learning to use sound effects effectively. Different does not have to mean inferior.

This all got me thinking about what kind of a parent I want to be.

I have always maintained I would not make the same mistake my parents did. But I also hope I don’t go too far in the other direction.

Like Amy’s (white, Jewish) husband, T was raised in a totally opposite environment. And personally – I hate conflict. I like being liked. I’m stubborn, but not that stubborn. I am not a high energy person. And most of all, I do not want to fight my children.

Ultimately, Battle Hymn is about a struggle for control. Chua decides her children must play a classical instrument. She chooses one for each, and sets out on a path to turn her daughters into stars.

I disagree with this. And I personally see no reason to push my children into pursuing any activity professionally. That takes serious money (which we mostly likely won’t have) and time (which I simply am not prepared to give) – the exacting attention devoted to studying her daughters’ technique, the detailed practice notes she’d write, the office hours lost shuttling the girls to lessons, the hours of driving to another city to see their out-of-town music teacher every weekend. Of course, if they were to be truly amazing at something and wanted to do that of their own accord, that would be a different story.

I also disagree with the notion that children owe their parents everything and personally I don’t subscribe to the whole filial piety thing (as I always used to shout at my father in my head “respect is earned!”).

But I do believe in the quest for excellence and a strong work ethic – because it’s 90 percent hard work and 10 percent talent. It’s that tension, really, between helping your kids find what they like and exhorting them to stick with it. I fully agree with Chua that most things are not fun unless you’re good at them, which takes practice (and passion), which in turn often requires external motivation.

Thinking back, I do sometimes wish my parents had pushed me more in a couple of regards – to continue with swimming (I can’t swim more than a stroke or two now), to get braces – or rather, stick with them through a second round – learning another language, even.  I wouldn’t call myself a quitter, but I do go through bursts and spurts of interest. Phases, if you like. Piano,  tennis,  violin and guitar (which I’ve gotten back into); songwriting. writing my great teen novel. While I am motivated enough to keep going with things that are truly important to me, I could’ve used a an extra push sometimes.

9 thoughts on “Chewing over: Battle Hymn of the Tiger Mother”