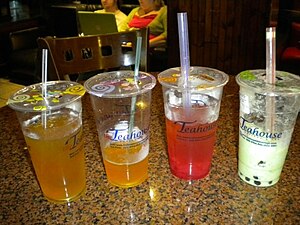 I know, I know. I’m Asian. Blasphemy, right? But there’s nothing good in my books about this stuff. The creepy, rubbery balls. Tea itself (I prefer tea to coffee but that’s not saying much). The weird flavour combinations. Give me a milk shake any day.

Ick. This is the only seafood I can think of that I turn my nose up at. It’s like the tofu of the ocean. The smell! The texture! And think of the poor baby oysters from Alice in Wonderland!

Any candy that’s not straight chocolate

Now look, nobody would ever deny that I have a sweet tooth. Health aside, I could easily exist on the two food groups of carbs and dessert. But I’ve never liked lollies. Kids would scramble to the corner dairy after getting their allowance to buy up packets of jet planes and milk bottles after school. I never did (plus, I only got an allowance for a few months). I like my food to look edible, not processed, plastic lollies. And who came up with the concept of fruit rollups?

What foods are overhyped in your book?