A girl (part of a gaggle) plumped down on a bench by the harbourside in a bra and, presumably, bottoms of some kind (I was too traumatised to look any lower than that). To be fair, it wasn’t lacy or see-through. If they make bras for outerwear, this was definitely of that ilk.

A British guy steal a candle in a glass off the table outside a cafe on Crown St, keep walking along, then coerce his girlfriend into relighting the flame after it gave out.

A Russian girl in denim boots.

A performer swallowing an enormous red sausage-shaped balloon. I videoed the whole thing but haven’t watched it since. I plan to show it to the boy when I get back.

A QR code on a church (QR codes are way bigger here than in NZ) that was captioned “Find forgiveness here”.

These freaky-ass birds. They’re everywhere. (I just googled “creepy birds in Sydney” but the hotel wifi is outstandingly dreadful. Giving up.) 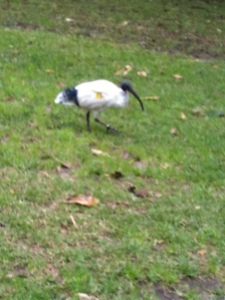 (ETA: Now at the convention centre, which has better wifi, where birdsinbackyards.net/finder informs me that this is an ibis.)

6 thoughts on “Things I have seen in Sydney so far…”