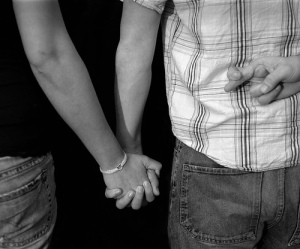 I’ve blogged a couple of times about the love lives of some of my flatmates (all guys, slightly younger than me and T). No kidding, their dramas make me feel like a total grandma. And of course, grateful to be well past all that BS.

The youngest – let’s call him X – is a total pretty boy, and he’s had a tempestuous on/off relationship with GF1 for over a year. During one of their recent off periods, he got with GF2, and when he and GF1 reconciled, he kept seeing GF2 in secret. I’m talking coming around to the house, hanging out in the lounge, putting her hands all over him, but NEVER being allowed in his room because that’s where he kept photos of him and GF1.(And for some incomprehensible reason, she likes to bring over one of her equally skanky friends as well – is this a new thing, tagging along to your friend’s boyfriend’s house to watch them get it on? Where you don’t even know anyone else who lives there?)

At first we stood back and looked on, shaking our heads at his nerve and wondering when the house of cards was gonna come tumbling down.I mean, surely one day he was bound to have one of the girls turn up and catch him in the act. Especially when he went to a party where BOTH of them were in attendance and both knew the host.

And then I found out that BOTH girls knew about each other. And neither had pounded the other to death. In fact, they were both fine with it – they seemed happy to share.

I have nothing more to say. Just had to share. You’re welcome.
Photo / Katie Tegtmeyer