I get to see some great specimens of humanity at my house. For example, the three girls who came by last night to get drunk and dirty with my flatmates. I honestly couldn’t tell you what they looked like – that’s how much makeup was on their faces. Hair? Dyed and straightened to the point of follicular death. Skintight outfits, teetering stilettos. I don’t know how old they are, but T says some of them are as young as 15.

One of them actually shares my name and tried to strike up a conversation with me a couple of times; I think she wants to be friends. But as much of a bitch as I am in private, I can’t bring myself to tell someone to their face that I have no respect for schoolage girls who dress and act like complete slappers.

And the scary Barbie blonde one? Somehow has us caught up in her ex-boyfriend dramas. Not only is he calling and harassing her, he called our landline while she was here. Instead of ignoring him, she kept texting him back, you know, to tell him to leave her alone. I told her to block his number. She liked that idea, but I know for sure she won’t.

Like me, T doesn’t have much patience for such BS, and tried to tell her that there’s no way she’ll find a “good guy” (not that she believes any exist) by getting dressed up, going around to guys’ houses, getting wasted and screwing them. Words, deaf ears. You know the drill.

It makes me sad to see this – they’re so young. It also makes me glad to have found T: you never know, I could have turned into one of them by now.

I planned to wear a waist belt to cinch the top in, but it only made me look lumpy and bumpy. Instead, I wore my medieval cross necklace and lacy knit shrug. Oh, and this is my new ingenious method of getting the whole outfit in one shot. 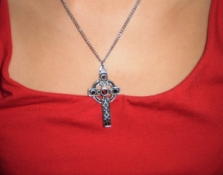 4 thoughts on “I may seem rude, but I’d be a lot ruder if I was forced to talk to you”