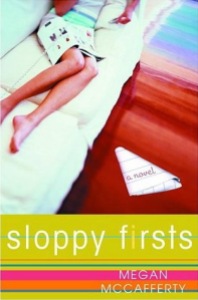 Possibly my most favourite books ever, Sloppy Firsts and sequel Second Helpings. There are three more (Charmed Thirds, Fourth Comings, and Perfect Fifths, released 2009), but IMO Second Helpings was the gem of the series. In a way I wish Megan had stopped after two; that book was the epitome of perfection for me. But we love Jess too much to miss her progressing through life, which is sometimes painful and hard to read, but we’re there till the end (a bit like Twilight?)

What is it about these books? Well frankly, Jessica Darling is very nearly me. Okay, my running prowess is not as good as hers (although it was the only physical thing I was ever good at), nor am I as insanely intelligent or confident, but at heart she is me. She’s obsessive, grumpy, neurotic and driven and of course given to overanalysing everything.

Basically, the series follows Jess through high school, college and beyond, and her on/off relationship with unlikely candidate and reformed bad boy Marcus Flutie. It’s full of her droll observations about friends, family, and life in general… I don’t know how Megan does it but she is absolutely inside the head of a 17-25 year old (I can’t quite remember what ages Jess is throughout). It’s incredible.

McCafferty nails her character’s voice perfectly through journal and letter format (which works surprisingly well) and Jess’ dry sense of humour comes through beautifully. Given our similarities and how much I identify with her I almost feel like she is the blueprint of my life and what happens to her will mirror my future. Hence, my waiting with bated breath for PF to arrive in NZ. (Which it has – stay tuned for my thoughts…sometime)

Okay, so this one’s a bit of a departure for me. Isaac Asimov, I’ve learned, is known as the master of SF (scifi for you noobs :P). I, Robot is based off one of his novels.

The Foundation series tells the story of humanity god knows how far in the future. Asimov took inspiration from the rise and fall of the Romans (who else?). There are practically uncountable inhabited worlds across the Galaxy (once we got space travel sussed, we colonised other worlds and made them habitable. Like Trantor, which we decided to basically cover in metal and steel). The Galactic Empire, which is a centralised governing body, is slowly dying – dramatic, I know – but psychohistorian Hari Seldon has a plan to avert the 30,000 years of doom and barbarity he foresees coming.

Now, that’s one of the things I loved: the concept of psychohistory. The name’s a bit bizarre, maybe a bit misleading, but essentially it’s like statistics. Get a large enough group of humans and you can accurately predict what they’re going to do and plot out their future, with potential deviations and branches to boot. Individual reactions can only be guessed, but humans in mass are predictable creatures.

And so Seldon devises a method to preserve the best of humanity and reduce this dark time down to a mere thousand years. It’s sparks the debate of free will and the ability to muddle through and make poor choices for yourself, of having a higher power helping you along. It’s interesting to ponder, at least for me. Would you rather have total free will, taking the good with the bad, or essentially have someone playing God and looking out for you? Manipulation, if you will.

I think it’s interesting that futuristic tales often tend to revert to old fashioned, even medieval, customs/speech. In Foundation, everything is very hierarchical, formal and proper. There’s a Galactic Empire. There are rules and regulations, it’s male biased, there’s a definite hierarchy of power. They speak quite formally and observe the strict processes they have in place in terms of things like politics. Anyway, after devouring the series I haven’t really found anything to match him. Not that I’ve looked that hard but other SF writers just don’t appeal.

The actual prose is not particularly exciting, however, and Asimov likes to get far too clever for his own good – a lot of the plotting and strategising really went over my head. He was a big fan of the twists and letting things happen  – THEN explaining them all in lengthy monologues after the fact.

I began by reading Foundation and Earth, an addition to the original trilogy. Although it’s not seen as kindly as the first books (and I guess it’s not as groundbreaking, but again, it was the intensive worldbuilding and travelling that hooked me. I was just fascinated by his imaginative descriptions of the worlds Trevize and co encountered). When I got out the original Foundation books, the writing didn’t grip me, but the worlds did and the stories of the characters. Plus, it made much more sense (because Asimov tends to refer back to past events a lot).

Asimov’s Robots series also really kicks ass, maybe even more than Foundation, as it’s more readable and is based in a far more interesting time period (long before the Foundation, during the age of robots, of course). So that should keep me busy for awhile. Trying to track down novels this old isn’t easy!

The Other Side of the Story – Marian Keyes

I love, love, love Marian Keyes. And this is her best work. There are no neat ends here but it’s a great yarn, and far more engaging (I thought) than books like Sushi for Beginners. There’s Jojo, the larger than life book agent who’s sleeping with her boss, Lily, her delicate, unfailingly kind and lovely author who’s written the ultimate sappy escapist fantasy book ever, and her ex best friend Gemma, who despises Lily for ‘stealing’ the love of her life.

Their lives run parallel, but come to cross in different ways. They all come to learn some hard lessons about themselves and others, and how to move on. It’s a touching, heartwarming book with healthy doses of Marian Keyes’ delightfully wry sense of humour. Quintessential chick lit at its best.

Her other books are also a must to check out! I mean, they’re not just about finding love. They’re about grief, heartache, family and addictions. I may not always identify with her characters but it doesn’t detract from her writing. Of note: Anybody Out There? is fantastic (mid-way twist I did not anticipate) and Lucy Sullivan is Getting Married is pretty good.

Great characters, amazing storylines (increasingly intricate plots I couldn’t actually get my head around towards the end) – just a real accomplishment.

I do agree with critics that the books got increasingly bloated after #3, but my faves are Prisoner of Azkaban and Goblet of Fire; rip roaring good tales without too much weighing them down.

4 thoughts on “Some of my all time favourite books”