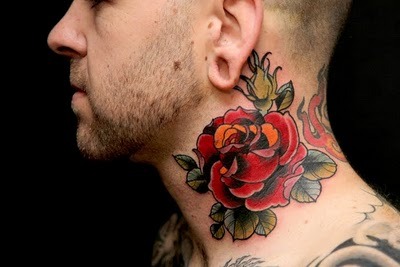 One of the next things on BF’s major to-do list is to get another tattoo. Preferably more. Lots more. I’m not a big fan of the idea; I don’t want him to look like a biker or a skinhead and I would like it not to limit him in his career. (Hey, it’s not my own prejudices I’m worried about! It’s unlikely he’ll ever work a desk job, but you never know. He’s already such a formidable physical presence that tats all over his arms will just be the icing on the cake.)

While I’m not principally opposed to getting inked myself, I just can’t ever imagine what I would want permanently stamped on my body, at no small cost either financially or physically. But lately I’ve been thinking about family and life and tradition and culture and all sorts of heavy things … And one night when I was walking home, I had a revelation: why not get a tattoo of my Chinese name?

The thought lasted all of a second. While I don’t actually know how to write my birth name in the language, this is not good enough reason to give myself a permanent reminder. The name has little meaning to me. It’s the name on my birth certificate, yes  but it’s not the name I go by on a daily basis. If you called it out to me on the street, I would probably not even blink twice.

That being said, it’s the name my parents saw fit to give me, which they took the time to choose carefully for their firstborn daughter. Aside from sheer laziness, I think that’s another big reason why I probably will not ever get around to legally changing it to my English name. And I’d like to make some small effort to recognise that today, although I wouldn’t have said that 10, 5 or even a year ago.

So, here it is: The next time I visit my parents, I’m not leaving until I learn to write my name in Chinese. (Or at the very least, take home a copy of it to stick on my wall. I’m realistic about my abilities.)

7 thoughts on “On ink, identity and permanent reminders”