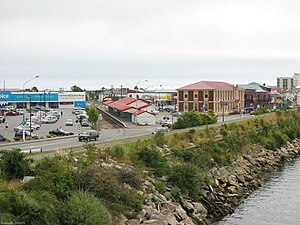 Greymouth on the West Coast of the South Island. Image via Wikipedia

You may have seen it trending on Twitter. #PikeRiver. It’s rare an event from little old New Zealand achieves such a feat. We tried it on the night the final of Outrageous Fortune screened. Unfortunately, we never decided what the official term should be, and tweets fractured into #outrageous, #OF, #outrageousfortune and more.

But this was different. It really is a national tragedy.

You may have heard about it. You may not. Essentially, 29 men – one as young as 17 on his first day, one who’d finished for the day but decided to log some overtime, men with children and wives and families – were trapped underground following an explosion in the coal mine last Friday. Odds are they died right away, but if not, then the second blast on Wednesday would have. It’s a story that’s gripped the country for over a week, everyone holding their breath to see if by some miracle those men might, like the Chilean miners, emerge alive.

Someone – a random Tweeter from abroad – jumped into the stream on the day the second “unsurvivable” blast occurred. “Where the fuck is Pike River?” she asked. Oh, the responses she got. She quickly backtracked and voiced her sorrow for the tragedy.

CNN, the BBC, al Jazeera and many more global outlets ran with the story. The blast at the Pike River coal mine in Greymouth didn’t just take Kiwis, there were Aussies, Scots, South Africans.

Now I have a question for you. When a disaster like this strikes, what do you want to read about? Do you want to know about the men who died? What they were like? Who did they leave behind? In short, their life stories, in celebration and remembrance?

If not, what do you want to see the media cover? Do you just want the dry facts? What caused the blast? What inquiries will be held? When the funerals are?

I won’t ask you whether you think media should back off and leave grieving families alone – I already know the answer. I’m just grateful I’m not one of the journalists on the ground tasked with that painful job. (Because that’s what they’re doing – their job, like it or not.) So let’s not veer off onto that topic. I’m only interested in finding out what kind of coverage you are interested in. If the process of obtaining that information requires inappropriate or intrusive action, well…

I’m sure your answers will give plenty of food for thought. In the meantime, I’ll leave you with this tweet:

* @fiatracer So many twitter hypocrites attacking media for getting in there, while desperately consuming the news they report. Get over it #pikeriver

* and this blog post from a journalist who covered the disaster.

“Covering a story like Greymouth is all about the faces. Those average, normal people being torn apart by fate.

It could be any of us at any time.

As a journalist you do your best to cover the event with as much compassion as you can and try to do your little bit to help if you can. To bring a smile, a hug, a kind word.

When the worst happens your heart breaks for them. Their anguish, their anger, their tears.

They say you have to remain dispassionate when covering events like Greymouth. You do your best but you’re only human.”