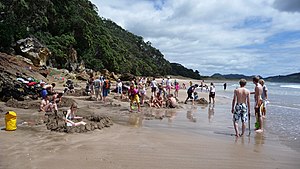 Have I mentioned that I’m engaged to the biggest procrastinator on earth?

Whatever doesn’t need to be done today, he will put off until tomorrow. Which is pretty much everything outside of work. If he has two chores to attend to this week, it will be a struggle to get him to do ONE today and almost as much to get him to do the other task tomorrow.

And did I mention that I am always right?

May be something to do with being a woman. Or just my intuition. Or simply practicality and knowing how the cruel world works.

I wanted to go to Hot Water Beach these holidays – the one thing I really wanted to do in the Coromandel. Instead of going there on the way to Whitianga – when low tide was at a decent hour – he insisted on stopping by on the way home.

We got there in the end. And it was crap. For one, the weather was miserable. For another, his right arm was more or less out of action from the elbow down thanks to someone slamming into him in the pit at Coro Gold. And low tide by then was at 7.30pm. We got there as early as possible – 5.30 – to stake out our spot. And even then, it was PACKED. People squished in shoulder to shoulder, shivering in the wind, digging their toes into the hot sand, waiting patiently for the waves to recede so they could dig themselves a hot spa (some have NO manners at all. In my world, first come, first served still stands. Not so, apparently). Idiots were attempting to dig even as the tide continued to lap up against the rocks, washing away their work – and effectively ruining that spot of sand for the day, leeching away the hot spring heat. We ended up leaving after less than an hour. A word of advice – go with the biggest crowd you can find. You’ll need it to a) secure your real estate and b) do the heavy digging.

THEN he refused to go to the ED once we got back to Auckland about 8.30pm, insisting his arm wasn’t broken, and it would be fine.

Three days later, the day before we were both due back at work, the tingling finally got the best of him and off to the hospital we went. (First, he insisted on doing some Googling. Which invariably led to possible diagnoses of imminent paralysis.) Four hours later, we came out with a medical certificate and diagnosis of damage to the radial nerve. Now it’s a case of wait and see and hope it’s nothing too permanent. (To be fair, going in earlier would probably not have done much, but it definitely wouldn’t have hurt.)

What have you put off and regretted?

5 thoughts on “Delay and pay”