Army boys in their boots. T reckons they would’ve run in those. To which I say, fuck that.

Cuteness. Nothing like seeing entire families kitted out for the run. And power to anyone running with a pram.

Just about a year ago I ran my first official 10k.

This weekend I ran my second race, the 8.4k Round the Bays. According to the official stuff, I crossed the line in 58 minutes, but really, at least the entire first 10 minutes were a wash. 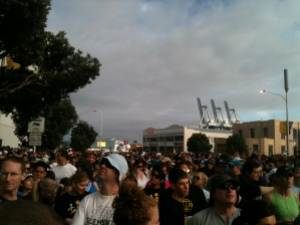 Looking backwards from my starting point

When 40,000 odd people turn up for a run, you gotta get in early. My first mistake as a rookie. I was a block back from the starting line, and the majority of the thousands in front of me were only in it for fun. Bang! goes the start gun. Then…we waited. Shuffled forward. Did that for a while. (Walkers to the left, runners to the right DID NOT WORK. Rules fail when people don’t obey them. There were walkers, kids and prams all over the road.) It got a little more spaced out after that, but the next 15 minutes were still very tight – rather than focusing on getting my run on, my energy went toward weaving and dodging people in order to try and get somewhat ahead. Oh, and nature started calling pretty early on in the race, which made for kind of an uncomfortable 7k or so.

It got insanely hot – so much so I had to tie up my oversized company shirt and roll the sleeves up over my shoulders. Believe it or not, the weather actually played along – the sun beat down until about noon and it started raining JUST after I got on the bus. Another note for next time – bring more than one safety pin, because the last thing you want is your runner’s slip flapping around on your chest. 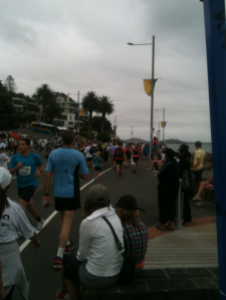 Where it all finished – right across from Rangitoto.

All up, I’m glad I did it – it was a great atmosphere at the start, music and all, and it was nice towards the end to see people on the footpath from Mission Bay on watching and cheering us. (Towards the end, you start to see the earlier finishers walking back along the route…the freaks who can literally sprint 8k…which kinda made me consider running back to town myself, which would almost comprise a half-marathon…) There are water stops all along the route, and Pump tents at the finish line spraying fine mists of water that are quite fun to run through. And the day wouldn’t be complete without queues for the rip-off buses ($4 for what would normally cost $1.80 – given that most of us used them, why not include this in the entry?).

Last year I decided I never wanted to run anything longer than a 10k. This year, I definitely feel I could do a half-marathon if I wanted (which is debatable) as long as I get better shoes. But I don’t think I can be arsed with a half – I’d want to do a full – and yet 42k really does not sound like fun at all. And while my company sponsored our Round the Bay entries, I doubt it’ll fork over the $100-plus for the Auckland Marathon apiece. Jury’s still out.