I recently lapped up the memoirs of two very funny, very intelligent women.

You should read them.

Is Everyone Hanging Out Without Me? – Mindy Kaling

Like me, a daughter of immigrants. Asian. And (not like me) deliciously witty. She is my hero.

Oh, and I want to be her friend. That is all. 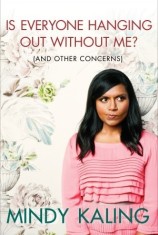 “I wish there was a song called ‘Nguyen and Ari’, a little ditty about a hardworking Vietnamese girl who helps her parents with the franchised Holiday Inn they run and does homework in the lobby, and Ari, a hardworking Jewish boy who does volunteer work at his grandmother’s old-age home, and they meet after school at Princeton Review. They help each other study for the SATs and different AP courses, and then after months of studying the news that they both got into their top college choices. This is a song teens need to inadvertently memorise. Now there’s a song I’d request… The chorus of “Jack and Diane” is: Oh yeah, life goes on, long after the thrill of living is gone. Are you kidding me? The thrill of living was high school? Come on, Mr. Cougar Mellencamp. Get a life.”

“There is no sunrise so beautiful that it is worth waking me up to see it.”

“Teenage girls, please don’t worry about being super popular in high school, or being the best actress in high school, or the best athlete. Not only do people not care about any of that the second you graduate, but when you get older, if you reference your successes in high school too much, it actually makes you look kind of pitiful, like some babbling old Tennessee Williams character with nothing else going on in her current life. What I’ve noticed is that almost no one who was a big star in high school is also big star later in life. For us overlooked kids, it’s so wonderfully fair.”

How to be a Woman – Caitlin Moran

I am a feminist.

I don’t understand women who don’t consider themselves one. It irks – no, PAINS me – when women start a sentence with: “I’m not a feminist, BUT…”

I understand the term has a bad rap.

But as Moran puts it:

“You might be asking yourself, ‘Am I a feminist? I might not be. I don’t know! I still don’t know what it is! I’m too knackered and confused to work it out. That curtain pole really still isn’t up. I don’t have time to work out if I am a women’s libber! There seems to be a lot to it. WHAT DOES IT MEAN?’
I understand.
So here is the quick way of working out if you’re a feminist. Put your hand in your pants.
a) Do you have a vagina? and
b) Do you want to be in charge of it?
If you said ‘yes’ to both, then congratulations! You’re a feminist.

Because we need to reclaim the word ‘feminism’. We need the word ‘feminism’ back real bad. When statistics come in saying that only 29 per cent of American women would describe themselves as feminist – and only 42 per cent of British women – I used to think, What do you think feminism IS, ladies? What part of ‘liberation for women’ is not for you? Is it freedom to vote? The right not to be owned by the man you marry? The campaign for equal pay? ‘Vogue’, by Madonna? Jeans? Did all that good shit GET ON YOUR NERVES? Or were you just DRUNK AT THE TIME OF SURVEY?

These days, however, I am much calmer – since I realised that it’s technically impossible for a woman to argue against feminism. Without feminism, you wouldn’t be allowed to have a debate on a woman’s place in society. You’d be too busy giving birth on the kitchen floor – biting down on a wooden spoon, so as not to disturb the men’s card game – before going back to quick-liming the dunny.

I can only hope this strikes a chord with readers of the “I’m not a feminist but…” ilk.

Because really. What part of modern life as a woman do you not appreciate? The right to work, and in an industry of your choosing? The right to choose to marry, and who, and whether to change your name? To have children, and how many, or not at all? The right to own property?

Look, I have never read any classic feminism texts. I read this because I love a good memoir and Moran is a writer I look up to. We don’t have much in common. She grew up poor, I didn’t. She grew up fast; I was a late bloomer. She started out as a music journalist; I quickly ditched that idea when I realised I don’t like most of today’s music.

But literally, almost every word in this book resonated with me; I found myself agreeing with almost everything she verbalised. (Not everything; I don’t think there can truly be any experience like parenthood; I’m not sure about her pole dancing > lap dancing argument and while I admire Lady Gaga’s trailblazing and ability to pen perfect pop songs, she certainly does do a hell of a lot with her clothes off.)

“I have a rule of thumb that allows me to judge … whether sexist bullshit is afoot. … It’s asking this question: ‘Are the men doing it? Are the men worrying about this as well? Is that taking up the men’s time? Are the men told not to do this, as it’s ‘letting the side down’? Are the men having to write bloody books about this exasperating, retarded, time-wasting bullshit? Is this making Jeremy Clarkson feel insecure?'”

“Recently, it has behooved modish magazines to print interviews with young women, who explain that their career as strippers is paying their way through university… If women are having to strip to get an education — in a way that male teenage students are really notably not — then that’s a gigantic political issue, not a reason to keep strip clubs going …what are strip clubs if not ‘light entertainment’ versions of the entire history of misogyny?”

“I cannot understand anti-abortion arguments that centre on the sanctity of life. As a species, we’ve fairly comprehensively demonstrated that we don’t believe in the sanctity of life. The shrugging acceptance of war, famine, epidemic, pain and life-long, grinding poverty show us that, whatever we tell ourselves, we’ve made only the most feeble of efforts to really treat human life as sacred.”

Hence, why I devoured this in a day.

I enjoyed greatly her chapters on birth (the first is terrifying, the second redeeming. Power to those who want uber natural births. However, for most of history childbirth has been lethal for women. I want hospitals, doctors, and all the drugs thanks). On lambasting the ridiculousness of fashion. And her intriguing hypothesis of pop culture as an indicator of the shift in power towards women. Although if Beyonce is the best we can do, please bring on the 22nd century, when hopefully females can actually run the world rather than assault our eardrums with songs about running the world while dancing suggestively in skimpy clothing. (I haven’t seen that particular music video, though I have seen the Glee version. Forgive me if the video is not actually like that; however, all of her others are, so I feel pretty safe in generalising here).

When I was in high school, my father told me soccer wasn’t a sport for girls. For years, I silently (never out loud, I’m Asian) shouted “Fuck you, Dad” in my head whenever I recalled that moment.

Now I simply hold that memory in my head as a reminder. My daughters will never hear that from their parents, and hopefully, never from any human being at all.