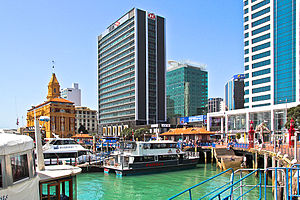 They say San Fran, London, NY, LA, Vancouver etc are the least affordable cities in the world (and yes, Auckland is up there too). Recently, I was talking to someone (Kiwi-born) who’s back in NZ but can’t wait to get back to the States. It was easier to get ahead in LA, he reckons – everything here from housing to cars to food to clothing, in terms of what you get for your money, and in proportion to incomes, is just beyond.

We’re such a nation of travellers. Most of my high school friends are still studying, or have only just graduated. Of my university friends, probably about half have already gone on their OE, while more are planning theirs already. Of those I encounter, usually professionally, the inevitable question comes up as to whether I’ve lived or worked overseas.

It’s a strange divide. Contrast this with the blue-collar types T works and socialises with, who’ll probably never go around the world, and may not have any desire to. The ones (and yes, I’m going to grossly generalise here) who have families, usually young; the ones who struggle along in low-paying work for years, who’ll never reach the highest tax brackets; who have little to no disposable income, or if they do, put it toward smokes, beer, and weed. The ones who, in contrast, make us look positively wealthy, like we have our shit together. Travel is a luxury afforded only to a certain class.

Will I love what I see overseas, and like so many New Zealanders before me, eventually book a one-way flight out? Given that we have one of the highest proportions of expats living overseas (many of whom originally intended to return, but never did), this is quite possible, although would depend largely also on the boy. Or will I come to appreciate what we have here? I’ve really enjoyed Sydney, for example – I can imagine there’d always be something to do here, much like how NYC always seems to have free entertainment on somewhere. But you all know deep down I’m really all about super simple things – baking, the beach, books, while nightlife and bars don’t really register on my radar.

The thing about growing up in the big smoke – I know Auckland is a small city by global standards, but it is the largest we have – is that the bar is set high. It’s all very well to advise us Gen Y-ers priced out of entering the property market to move away from the big centres to areas where houses are a fraction of the price. But that entails a whole change of lifestyle – a reduction in the range and type of work available (as well as lower pay), distance from friends and family, less access to everything from books to ethnic cooking ingredients to films to concerts to museums.

Have any of you lifelong city dwellers made to downsize and slow down in the country?