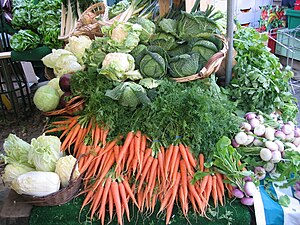 While eating healthy is second nature to lot of people, it doesn’t come easily to me. While I’m picky about the kinds of meat I eat, I’m just as (if not more) choosy when it comes to fruit and veg. And of the few I do like, most of them are out of season and stupidly pricey right now. Good news is, winter is officially over.

So…my challenge for this month is to eat fruit or vegetables at least once a day. Potatoes only count as a half-win. Er, and I think the rest is pretty straightforward!

I anticipate a lot of trial and error. I don’t really know what to do with vegetables. I know that may sound silly, but it’s true. Case in point: I was trying to figure out how to jazz up some spinach last week. I caramelised some onions and fried up tiny potato cubes. Thankfully it came out well, but coming up with interesting combinations is HARD WORK.

In the meantime, I managed to make three new things this month. Er, I didn’t quite get to the cheesecake, but I did bake these instead:

Cheese and bacon muffins, with a few ill-advised spring onions sprinkled on some

Even in smaller portions, after two weeks of nibbling I still hadn't finished it all

Carrot cake. A little too moist and dense, but damn tasty with lemon cream cheese icing

Finished the whole thing in less than four days 🙂