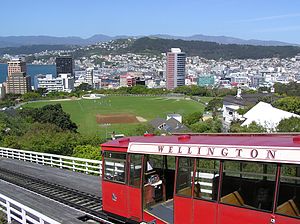 Every so often the possibility of spending some time in Australia rears its head in conversation. (Edited to add: And talk about timing – yesterday I found out a friend is moving to Perth this month…)

As Dita De Boni points out, “Both my sisters live across the ditch and seem to have a never-ending array of incentives to lie back and think of the country’s future tax payers.”

It’s so true. The $5k-plus baby bonus (I suppose that would sweeten the agony of labour?). And apparently T’s aunts get lump sums for their kids at Christmas.

Add to that 9 per cent super and warmer weather, and no wonder so many Kiwis have made the leap.

Then again, cars are expensive over there. And working in the mines does not appeal. (Of course, there are plenty of nonlabour jobs too, but mining and trucking are where the demand seems to be.) T hates the heat, and Australia in general – he takes pride in assuring me they really are as rude as people say. (Amanda, however, was lovely in person!)

I kind of hate myself for even writing this, because I’m quite honestly exhausted with the NZ/Australia debate. Sick of surveys and colour pieces on those who’ve defected; sick of business analyses talking about “catching up with Australia” and our “low productivity”; sick of the polarising views (you’re either a fool for staying or you’re a fool for going). And given my job, I’m exposed to quite a lot of this. Heck, just recently local media picked up on a story about homeless Kiwis being flown back from Melbourne. That’s some major WTF-ery there.

The truth is, we’re always going to be overshadowed by our bigger cousin – the one with mineral riches, the one who brought us Neighbours and Home and Away, the one that’s about eleventy million times larger in every way. It’s like we have an identity crisis – we latch on to any mention of us “punching above our weight”, as validation of our worth and existence from other countries.

The worst thing is, we’re even fighting amongst ourselves. Lonely Planet recently named Wellington the coolest little capital, and before long, we were all scrapping about whether the title was deserved and generally playing true to the Jafa stereotype.

Can’t we just accept us for what we are? I’ve come to accept myself for who I am – something I think all women struggle with – and now I wish my country could do the same. I’m going to do my bit by minimalising all bitching about how expensive Auckland is, at least until summer ends and I have nothing good left to say about it…