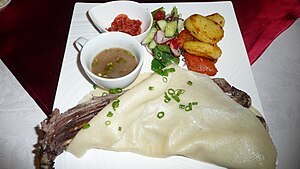 Him: “Vietnamese? But…but  all the times we’ve gone out to eat recently have been Asian!”

We can go to a steakhouse. We can go to a pub (but we can easily make that stuff ourselves, or buy takeaway versions for much cheaper). Or we can go to a proper fine-dining restaurant, except that’s way out of our price range. We can do Chinese/Thai/Indian/Vietnamese etc for $20-30 for the two of us; that wouldn’t even get you one meal at a European restaurant. (Or as we, the ever PC interracial couple like to refer to it, “white-people food”.) Also, I’d rather eat ethnic than Euro on any given day, no contest. But I understand not everyone feels the same.

Well Heeled once blogged about the ‘restaurant hierarchy‘ and how ‘ethnic’ cuisines are generally placed at lower price points. The same rings true here; Spanish, Mediterranean, French, or haute cuisine – I’ve never eaten out at such places, and probably won’t be doing so anytime soon. While there are certainly pricier Chinese establishments, for example, they aren’t afforded the same prestige as, say, SPQR.

(Oh, and we ended up going to Hansan Vietnamese anyway. And we both loved the food. The $10 meals were just the seasoning over the soup.)

What’s your favourite/go-to cuisine when eating out? Do you get much choice in the area where you live?