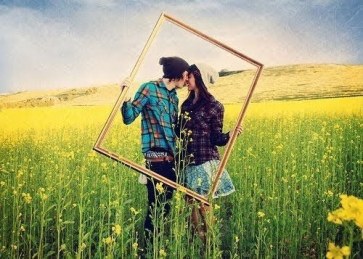 I had a wee giggle when some of you said you’d never had your engagement photo/announcement in the paper. Maybe it’s an American thing, or maybe I read the wrong papers, but I’ve never seen one with pictures! Or do you mean in the social pages, or something? The thought never crossed my mind. No, these would be purely for me. We have very few photos of us as a couple, let alone decent ones (offhand, I can only think of two I like. And we’ve been together more than five years).

I would really like some nice pro or semi-pro ones, even if they’re only done on my little dSLR (T’s sister and her partner had his sister shoot their family when she came for a visit from the States, and all the pictures look beautiful. It’s funny what someone who knows their way around a dSLR can achieve.) But that can probably wait till we start scouting for a wedding photographer.

I have my ring back, and I’m actually wearing it. None of the big name jewellers would even touch it. Staff would look sideways at the three-piece bridge, slide it onto the sizing horn, silently count the number of sizes it would have to lose, and shake their heads. But Carats, a boutique, indie place where they handcraft everything, took it on. Just as I was about to give up and wear it round my neck! The guys were lovely and it only cost me $500 – I highly recommend them! (T darkly said that it was probably so cheap as they would get a fair bit of gold out of the band – yes, the new band he paid to have put on his grandmother’s ring – because the difference between the original and the resized version was literally half the length of the sizing horn. I was scared to count the number of sizes in between.)

But for a girl who hardly ever wears any jewellery, putting a ring on every day and taking it off at night is weird. (I think we all know what happens to women who wear theirs 24/7 – they get them cut off their fingers on their deathbed.) It also feels a bit unbalanced. Perhaps I need another ring…? One for either my index finger on the same hand, or else the same finger on the other hand. I’m thinking a ruby ring…my favourite colour, the colour of love, my birthstone. Although from the scouting I’ve done, this will be harder to find than I thought. I like understated jewellery. Yet, everything these days is so blingy, so sparkly, so OTT. ESPECIALLY coloured gems. All coloured rings are tacky, tacky, tacky! I just want a simple, silver band with a little plain ruby on top. Nice and subtle.

But there’s no rush; after all, I have a lot to save for. And for those who wanted to see it, I’ve uploaded some photos to Facebook.