Regular readers may well recall my professed love for Caitlin Moran. Incredibly hilarious, with a too-extreme-to-be-true life story, with a Tumblr devoted to her utterings…  she is funnier, sharper, sassier and all around awesomer than I could ever wish to be. I would be the sidekick best friend to her wild-haired heroine, if that.

When I realised there was a copy of her new book, Moranthology, in the office, I was prepared to arm wrestle my editor for first rights. Thankfully, it didn’t come to that. I called second dibs, and shortly after – just as I was about to tweet about the whole saga – she came up behind me and placed the hallowed tome on my desk. MY BOSS > YOUR BOSS. 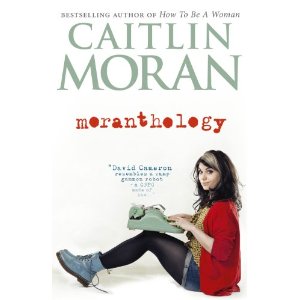 Moranthology (see the wordplay there?) is a collection of her published writing. To date, I’ve read very few of Moran’s columns, essays and interviews. This is because most of them (if not all?) are for The Times, which does NOT put its content online for free, and this fact warrants an entire column, which is included within Moranthology. However, I think it’s safe to say hers is writing I would pay to read. Moranthology well and truly cemented my inkling that I can only hope to one day be as witty and insightful as this lady.

Her interviews with celebrities are both amusing and touching (Gaga, Keith Richards, and a guy I’d never heard of before who deep down thinks if he does well enough, his dead mother will come back). Her TV and pop culture columns are delightfully snarky, without resorting to outright bitchery. And she’s also surprisingly deft at tackling serious issues with compassion. Mental illness. Poverty. (Both of which she has first hand experience of.)

I loved this passage from Frozen Planet: A world of fatal ice cream (a review of David Attenborough’s show):

“[Frozen Planet] shows us what we will lose in terms of the awe and beauty of these places – the magic of being on a planet topped and tailed with these outrageous landscapes; white like teeth and cloud and pearl; wild like ecstasy, or the Moon. Heaped, blown, billowing snow: a world of fatal ice cream, punctuated by volcanoes and aqua melt-lakes, and penguins leaping out of wave-foam like girls out of a cake.”

But I’d argue that Moran is at her best when tackling what you’d call pink issues. (Female issues, obvs. Women’s talk [said in stiff-lipped British male voice].) Burqas and abortion get the Moran treatment with the usual dose of levity, but she also manages to genuinely argue her point at the same time. Making light of something in a light-hearted manner while simultaneously getting across a serious message is MUCH easier said than done, I can tell you. I especially appreciate her brand of what I’d call working-class feminism. It is accessible and sensible. Academic feminism is wonderful – but let’s face it, very few of us care for it.

And just when you think she can’t get any better, she busts out something like MTV Hoes:

“When I was a teenager, all my pop heroes were Britpop, and grunge – unisex jeans and sneakers for all. I was raised with the expectation that, if I wanted to, I could sell twenty million albums with my upper arms covered at all times.

My daughters, on the other hand, are being raised inthe Era of the Pop Ho. This is a time where the lower slopes of Britney Spears’ leotard-clad pubis mons are more recognisable than – although oddly redolent of – David Cameron’s face, and pop videos for female artists have become so predictable, I can run you through what will happen in 90 per cent of them…”

She proceeds to describe the generic pop video outline:

And of course, the usual Random House press release comes tucked into the book cover, sticking out and annoying the hell out of me. Upon skimming the release date and RRP and all that other guff, however, I spy the line that proclaims Caitlin is available for interviews.

I could interview Caitlin Moran! If only I actually had a legit reason to do so … and any clue what I could possibly say to her.

2 thoughts on “It’s official: Just call me a Caitlin Moran groupie (or, Moranthology rocks my socks)”