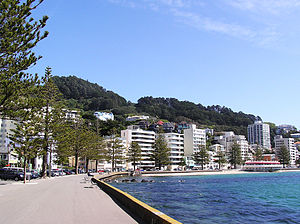 Oy. Who would’ve thought it’d be so hard to find reasonable accommodation in Wellington on Homegrown weekend a month out? I guess there really are that many outoftowners descending on the capital to rock out, or else there’s some other major event on. Or maybe they just don’t have as many hotels as we do, which I highly doubt.

Originally the plan was to go down with a group of others on a converted bus (which has beds, a bathroom and kitchen.) However, having now seen said bus, coupled with the fact that I don’t particularly wish to spend time with that particular group of people and that I have more plans for the weekend and don’t want to be constrained by their schedule – we’re going to drive down by ourselves.

It seems that practically all the city’s accommodation has gone. Especially any in my price range. This leaves us with a few options: backpackers, staying away from the city, gambling on a last-minute hotel deal, or simply making the most of it and staying at a swank hotel. I am yet to make a decision; can anyone recommend an affordable and not too shabby motel/B&B? Cooking facilities a bonus, we’ll probably be there three nights.

Confession time: I don’t generally budget for trips. But I’m going to try it out and see how that goes.

Tickets are paid for.

Food: $150? We’ll bring some food for the trip down, to bring into the concert, and to cook. Sandwich stuff, fried rice, baking, noodles…uh, other quick and easy things *temporary brainblock* Even if we don’t find a place with kitchen facilities, we have a mini gas cooker which lives in the car. I assume we’ll purchase some food at the arena, make a stop at a supermarket, plus we’ll want to eat out – I’ve got my eye on a French patisserie and a chocolate bar.

Accommodation: As yet unknown. Ideally around $300. Possibly more like double that. Or half that if we “rough” it, by my standards. But hopefully not.

Friday: Drive from Auckland to Wellington. Arrive in the evening. Check in, maybe wander the streets and stretch our legs, then sleep.

Saturday: Check out aforementioned eateries. Concert. Stumble back to wherever we’re staying, and collapse.

Sunday: Sleep in. Ride the cable car and visit my friend L. Perhaps a stop at the museum and a stroll along the waterfront.

Monday: Check out. Drive back to Auckland.

I’m just coming off a four-day weekend and a recent music festival but by Jove, am I looking forward to it.