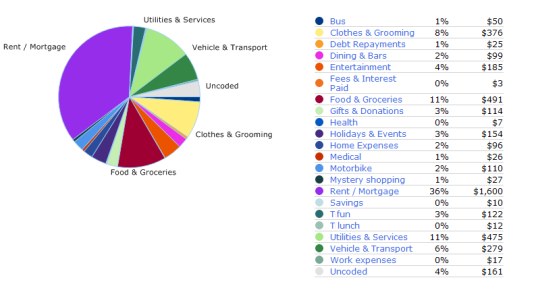 ** Click here for more info on my monthly spending roundups.**

Clothes: Yowza. A same-day shopping run for this wedding was pricey, but necessary – a suit, tie, shoes and a new dress shirt for T. He works in logistics  and was previously in trades, so there’s generally not much need for him to dress up (the last time was probably my Year 13 ball, for which he rented a suit). This was our first peer wedding, and we have more to come, so at least this won’t go to waste. Plus a haircut for me and sunnies for him.

Dining: Seriously? We killed this. To be fair, our anniversary dinner was free, and then we were out of town for the last week of the month. Perhaps not so impressive? But $99 for three weeks ain’t bad.

Entertainment: $20 at the driving range, $5 for parking…and $160 on food and beer for our housewarming/engagement party.

Groceries: Pretty stoked with coming in under budget, especially as I spent lots on fruit in my clean eating week, and this included holiday groceries as well.

Gifts: All gifts, no donation. Slack.

Holidays: Petrol, snacks, etc. Will likely end up being more as we’ll chip in some cash to go toward the bach we crashed at.

Home expenses: We bought a wooden outdoor set off TradeMe. Plus a free table and small TV cabinet from my mum, and we are officially in fully-furnished biz.

Motorbike: $33 for its warrant, the rest on petrol.

Savings: I funnelled a measly $10 extra into savings this month thanks to a quick mystery shop. Definitely didn’t hit 40 percent – probably more like 20 what with gifts and wedding clothes. Plus I still have to put some money toward the bach…so I won’t tally the total up yet.

T fun: This really is too much, especially as he’s supposed to be managing his own spending money from his own account. Apart from renewing his Xbox membership, this is just a ton of small transactions – an HDMI cable here, McDonalds there, a multitude of apps $1.29 at a time.

Utilities: Extra high because Orcon billing ended up in two payments this month. We also switched to Powershop (review coming soon), and in addition to our final electric bill with Contact, I bought some power packs at a ridiculously low price per unit. Sky bill was higher than usual, too, thanks to getting in billing sync post-move.

Uncoded: One big sticky transaction. $75 of this was lent out – waiting on that to come back. $40 was spent on a replacement car part for a friend (T was asked to try and fix the driver’s window, but managed to break it worse) and the rest was spent at NYE.

This also seems as good a time as any to review our annual spending.…

We spent less in quite a few categories last year compared to 2010:

Entertainment: $2454 vs $1685 – last year included an Xbox, seven concert tickets (plus two more onsold), while this year was just four concert tickets, passes to two food shows, the Easter show, an Entertainment book and our engagement party. Plus miscellaneous extras

Groceries: $7486 vs $6594 – prices certainly haven’t gone down, so I can only commend us for shopping smarter. What’s more, we’re eating better. That rings up at about $20 saved a week.

And more in others, understandably:

Clothes/beauty/grooming: $945 vs $1577 – I bought more clothes for work, T bought a suit and electric shaver/haircut kit.

Holidays and events: $1844 vs $4996 – There was pretty much no travelling in 2010 – I can think of two weekend trips offhand. In 2011 there was Rarotonga, two Wellington trips, two Coromandel trips, passports, sleeping bags

2012 really wants to be the year of frugality. Yes, you do. No concerts (unless the Chilis come). No clothing purchases except in dire straits. Watching food spending on all fronts, turning switches off at the wall. Travel will be where it’s at – a few domestic trips, potentially an Aussie trip to visit a good friend once she moves over in April, probably our South Island road trip, maybe a Hong Kong trip with family if a deal turns up.