This month I did something a little different and tracked every single expense by hand. I just wanted a really accurate picture of our spending, and although it started off kinda fun, I soon fell behind and it became more of a chore. I’m pretty sure I didn’t miss anything off – here’s hoping – and certainly nothing major. What was nice was having the flexibility to make up categories of my own! It inspired me to finally get my butt into gear and add three new classifications in my online banking tracker (you’re allowed to add four of your own maximum). 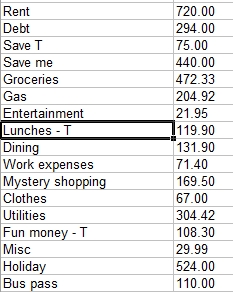 In extra income, I made $355 from my second job (which went towards our Waiheke trip) and netted $166.41  from mystery shopping after purchases. That went towards a pretty summer dress ($30) and the rest was split between our ‘bills’ account and savings.

Run once a week – Done, barring last week when we went away… but at least I got some swimming in!

Make an upwards career move – Done, to an extent. I’m still not counting this as fully achieved.

Donate to charity – Done in cash, canned food to the foodbank, dollars earned through an online survey site, and some old clothes for a child cancer appeal.