I’ve been wanting to learn more about coding for a while. Believe me, I harbor no delusions of becoming a ninja web designer/programmer but I did want to get up to speed with basic tweaks and being more comfortable in source code. I *think* I get the very basics of HTML, but CSS? No, I’ve officially come up against CSS and been forced to back down. 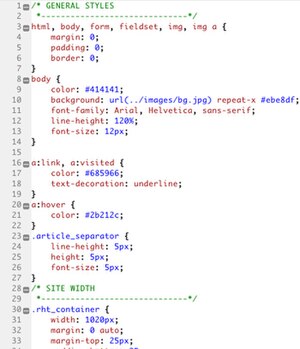 I probably knew just as much, if not more, about HTML 10 or so years ago. The days of geocities, and homepage.com. When I (and friends of mine) built websites for the hell of it. Oh, the days before copyright and plagiarism! Sound files, pictures, borrowed at random…I shudder to think how many rules my S Club 7 fansite violated (I grew up in the age of manufactured pop. Judge if you must). My first brush with CSS – I didn’t even know what CSS stood for then – involved me pinching the code for what was a really nifty nav bar back then – something like green text on yellow buttons, which hovered aqua. Or something equally garish. Somewhere in the haze of third year journalism, I also built another hideous site on Dreamweaver – based around TABLES, believe it or not.

But times change, and we must move on. My brilliant idea to look at other blogs’ source code and play around with them at home (tweaking my Tumblr theme got pretty old, given its simplicity) quickly hit a snag when I realised that the done thing is to link to external stylesheets – stylesheets of course being the thing I really need to focus on.

So while I toil away coding a super simple page from scratch, does anyone have any tips on how I might go about teaching myself some basic CSS?

15 thoughts on “CSS is kicking my ass”